The visitor will be able to experience Pieria and Mountain Olympus, Athens, Meteora and many other places. From the well-trained staff of the Travel Agency "Kourtidou Travel", with its years of experience, visitors will come across a variety of destinations, capable of meeting the needs of each visitor. 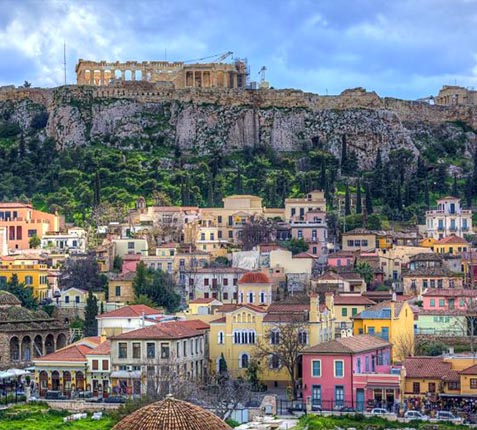 Athens is the capital of Greece and Hellenic Attica. Being a modern cosmopolitan city, Athens in ancient times was known as a strong city-state and an important center of civilization. The first point of our excursion is the magical Acropolis, where tourists visit the most important monuments of antiquity: the Parthenon, ancient temples and sanctuaries.
During the next two hours and during a break between the main programs, you can visit all nearby museums. The ancient Greek theater of Dionysus, the underground museum and the temple of Olympian Zeus are worth visiting. Next stop, the white marble stadium that is shaped like an elongated horseshoe with a precise reconstruction of the ancient stadium.
Then we head to Syntagma Square, where the Parliament building is located. We are watching a change of the soldiers' guard, called "Evzones".
On the way back we stop in the gorge of Thermopylae where the famous battle of King Leonidas and the three hundred Spartans took place against the Persian army. 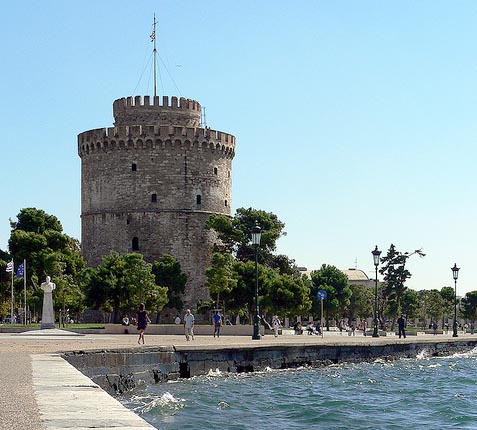 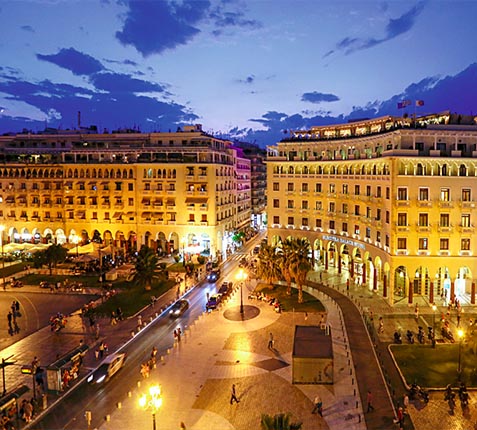 Thessaloniki is the capital of Macedonia and the northern capital of Greece, city of three cultures - Greek, Roman and Byzantine, a crossroads of continents and shopping streets, the cradle of Orthodox Christianity.
The tour starts at the Acropolis of Thessaloniki - Upper Town, which is a fortress-wall connected by magnificent towers with panoramic view of the city and the Thermaikos bay.
The next stop of the program - the White Tower, which is the symbol of the city. Next to it there are two monuments: Philip II and his beloved horse, Bouchefala.
Then we will visit the temple of Saint Demetrius. Saint Demetrius was one of the first saints of Christianity and is one of the most respected saints in Greece. In the temple lie his relics. 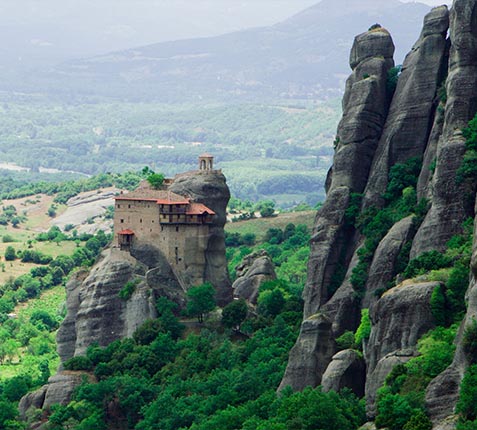 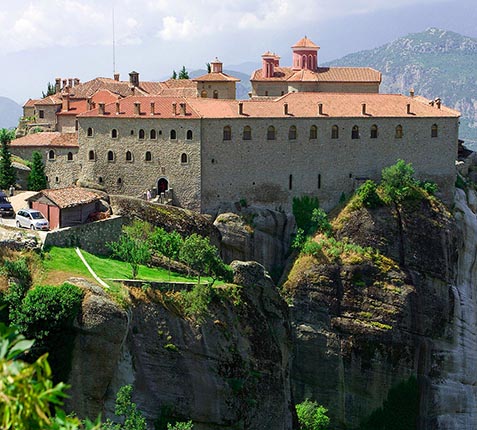 Created by nature and man, these amazing, huge, floating in the air sculptures are called Meteora. On the one hand, Meteora - a geological miracle of nature, which you must see with your own eyes to believe it, on the other - the Christian monasteries, based on the huge steep cliffs, majestic to the sky, create an indescribable feeling, causing both fear and admiration.
The rocks have acquired their strange forms and look like a "rock city". Meteora today is rightly called the "eighth miracle of the world" and is an important part of the Christian pilgrimage. Monasteries are located on high rocks up to 600 meters high.
In the past, there were 24 monasteries, but 6 monasteries are open nowadays: 4 for men and 2 for women.
The tour includes visits to two monasteries, both for men and women, where the guide will tell you about the history of their creation, the unique murals and icons stored there, for their recognition by UNESCO as a World Monument of Cultural Heritage and for the life of a monk. On the street there is a stop at the illustration lab and for lunch. 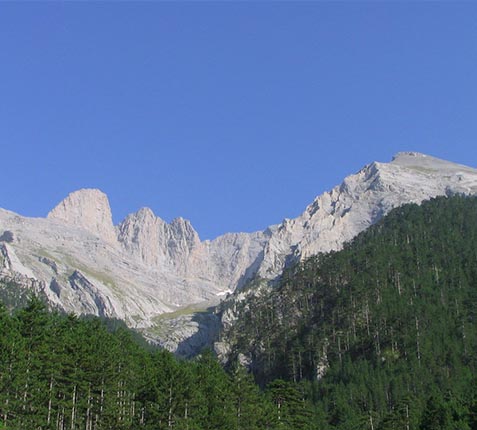 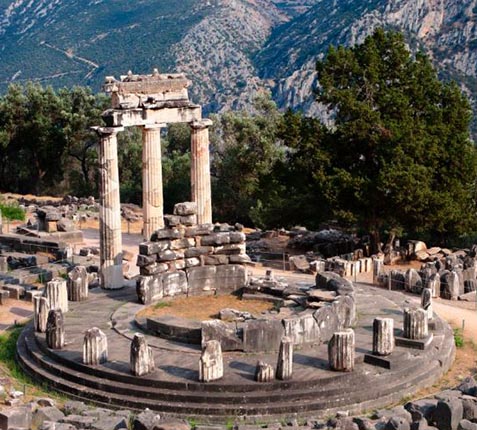 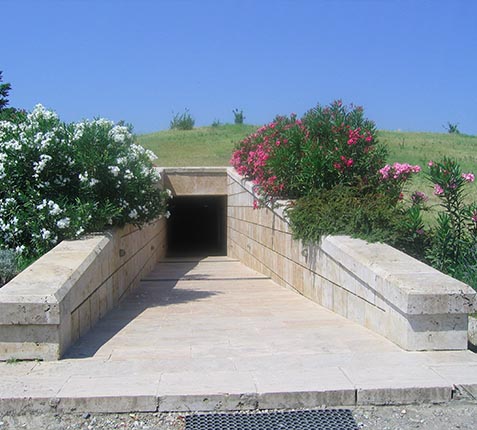 Olympus is a 6km long mountain range. The first stop of our trip is at an altitude of 1300m. From this point you can see a spectacular panoramic view of Northern Greece and the highest point of Mytikas Ridge at 2.918m and the equally famous peak of Stephani, known as the "throne of Zeus".
The next stop of our tour is the ancient city of Dion, which was founded in the 5th century BC. Ancient Greeks believed that if at the foot of Mount Olympus they built a city and worshiped the gods, then they would have a favorable attitude towards them. It was from Dion that Alexander the Great began his eastern campaign.
After that we head to Vergina. Vergina is the former capital of the Macedonian kingdom, the city of Aigai, where relatively recently in the 1960s the royal tombs of Philip II and his seventh wife Cleopatra's were discovered, as well as the tomb of Alexander IV, son of Alexander the Great and Roxanne. 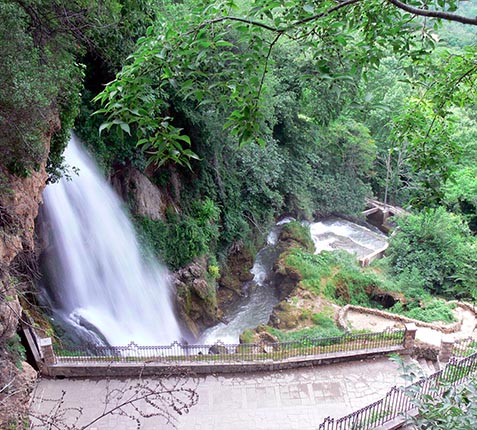 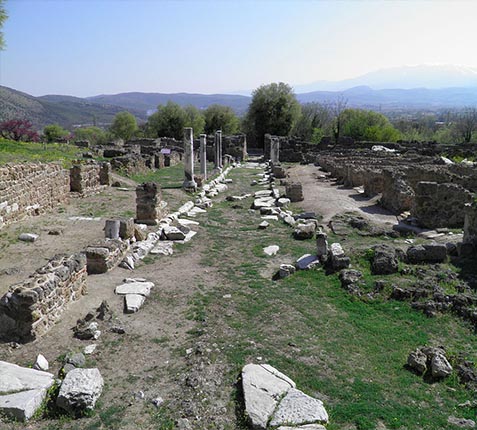 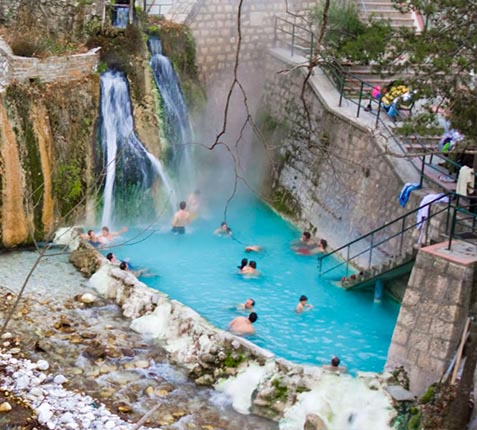 In Edessa you can admire the waterfalls, small and big, including the waterfall "Karanos", which was named after the first ruler and founder of the city. Then we will be transferred to Loutra, called "Garden of Eden" and known since the time of Alexander of Macedonia.
Loutra location is located in the middle of the mountains and the green forest through which the river Thermopotamos flows. Along the shore are located hot water baths whose temperature reaches 37°C.
The healing properties of water are recommended for the treatment of bone and joint conditions, the respiratory system, blood circulation disorders and skin rejuvenation. 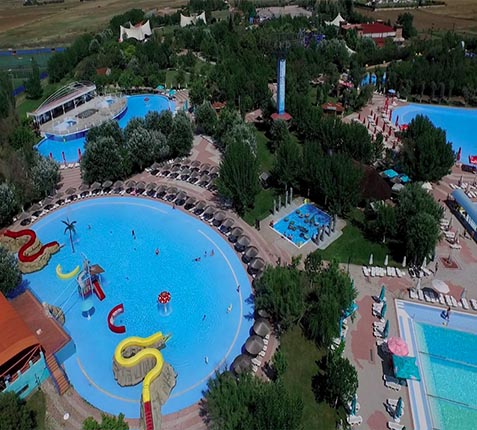 Just 8km away from the city of Thessaloniki lies the water park "Waterland", which covers an area of ​​150,000 square meters. Here is the largest swimming pool in Europe (3,500m²) with artificial waves that reach 1,5m high.
The waterpark is remarkable for the fact that one of the most modern automatic water filtration control systems is installed, which ensures the purity of water for 24 hours.
In the waterpark you will find water slides up to a height of 13 meters, pools for adults and children, basketball and volleyball courts, tennis courts, mini-football, gym, playgrounds, car rental, playroom, cafes and restaurants.